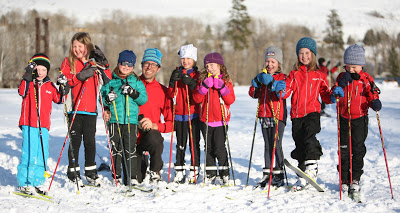 The coaches have been exclaiming about the progress all the skiers are making throughout the season!  It is great to see the skiers swarming the hills around the McCabe trail and enjoying the ups and the downs with skill!  Chris “Flash” Clark built some rollers and bumps on a gentle hill at the McCabe trail and it is popular with all of the Team.

Coaches’ comments on the kids in their groups:

From Coach Mark Roman: Addison Stratman is one of our newer members but plays a true leadership role and is one of the most helpful. Annie Simmons always shows up with a smile looking for fun. Nichola Northey wins the “polkadot jersey “as our best hill climber and most likely to be on podium some day. Lily Colin wins the “Most motivated by M&M’s” award. Kaylee Mitchell:  I give Kaylee the most coachable award.She is a fighter and most noteworthy she NEVER COMPLAINS. Grace Gonzalez: she is our deep thinker and most likely to be on the Supreme Court some day Lillian Overbeck: along with being a talented off-piste powder hound Lillian was our resident storyteller. Hazel Culpsmith: Our true adventurer. She wins the “Most likely to Nordic ski from summit of Mt. Gardner” award.

From Coach Jill Sheley: Pearl Spence!  At the start of the season, Pearl could barely achieve forward motion and was afraid of downhills.  Now, she’s a solid skier, and leads the group in classic!  And she’s a regular alpine racer on the downhills. Mia Libby can ski as fast on her classics as the rest of the group on their skates.  Proof apparent last Tuesday when she brought her classic skis to skate practice.  And she smiled the whole time. Lily Arntsen is all smiles, all the time and LOVES skiing.   She’s got strong technique and has a long future of Nordic skiing ahead of her.  A’lea Colin gets better and better with every practice.  She listens, tries and improves.  She encourages her friends and makes everyone laugh.  Teague Monahan is tough! She powers through every practice and cracks jokes the whole time.   She loves to create ‘accidents’ where all the girls end up in a pile at the bottom of a downhill.  Phoebe Cole is the leader of the pack.  Where she goes, all follow.  Let’s hope she leads all the girls into many years of Nordic skiing!  Gretta Schumaker is the little engine that can.  She’s ½ the size of the girls in her group but skies like a pro.  She’s a joy to watch and a technique role model for the other girls.

From Coach Bob Nielsen: Greetings from the back of the pack.  I have thoroughly enjoyed another season of  herding small MVNT  skiers in the U8 group. Sweep position always provides  the best views of  pure enthusiasm powering arms/legs- skis/poles .  It’s a sight to behold.  Early season is a time to get to know some of the caboose-kids just learning to hook to the engine.  It’s truly great to see when the kids (parents) ignore occasional less than beautiful weather and come to practice  when it’s December, cold and dark. Some of the rear guard include very competent skiers just blowing off a day of school and having fun.  Mira Hirsch, Neve Kelly, Elaine Walker, Adelina Humling, Ingrid Venable, and Isolde O’Driscoll spent as much time pig-piled on the trail, a heap of happiness, as they did up-right and mobile, on some days.  It’s good to know how to fall, laugh, untangle, get up and go. Other days that same bunch would be doing the locomotion up the hills. For positive vibrations, check out little Ally Hovee!  Never saw her not smiling and happy, and from her first couple times of not being  able to lift either ski off the ground, her ability to skid was a pleasure to behold. Being mostly in the back, I never got to hang out much with with the little rockets Wylie Smith  and Maeve Belsby, or Ben the bomber Northey and Sam Polson,  or those powder hounds Gretta and Wyatt Schumacher.  Were they even in the U8’s?  I could pretend they were as they flashed by occasionally.  I very much enjoyed a  steady core group of Sophia Marrone, Sisu Clark,  and Zach Dubowy, though they also made steady progress and became harder to keep up with.

Thanks much to the parents, like Joel Dubowy  and Melissa Raye, who often came to help herd shrimps.  By the way, I’m pretty sure we kept track of all the kids.  If you are missing any, they might be hiding behind a certain tree.

From Coach nd U10/U12 Leader Allison Delong: Ayeanna Ruprecht shows up to practice always ready to go and with a great attitude.  This is only her second season with the team and she has shown incredible improvement in her technique, thanks to her excellent willingness and ability to stay focused and listen, in addition to her good body awareness. Her contagious smile is largest when she is skiing downhill in the powder!!!

From Coach Ted Young: The U8’s are a great group of kids. Lots of energy, enthusiasm, and full of play.  Never hesitated to try the hard stuff. I know they learned a lot.

From U14 comp crew coach and MVNT Director Leslie Hall: Travis Grialou is a group leader and has been working hard on his technique all season. He calmed down “the wobbles” and focuses down the track both in skating and classic skiing. He has been the one to catch during relays and speed sessions. Ian Delong‘s calm and quiet presence is appreciated. He works hard at each task and is a solid team member in many ways. Ian has tons of potential that we are excited to see blossom in the next few years. Lindsay Worrell is a determined young lady and she brings that strength to pushing herself in all practices and races. She has come a long ways technically and is working to be more flexible and square on her skis.  It is exciting to see Lindsay charging forward in life and skiing. Liv Aspholm is the group director, taking charge of choosing teams for most relays and games. She is also taking charge of handling stress and pressure during events and managing it well.  Her technique is strong and she accepts input well and puts it to use. Eva Weymuller helped us all work on our downhill gliding skills. She tell