Novie McCabe on her Trip to World Juniors 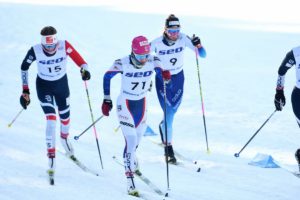 Novie McCabe on her way to 10th place in the 2019 World Juniors Mass Start in Lahti, Finland

In January I had the opportunity to represent the USA at World Juniors in Lahti, Finland. Team USA arrived a week early in order to spend some time adjusting to the new time zone and to get to know the courses. The skiing conditions were pristine, we had access to great trails right outside of our housing in Vierumaki, and the trails at the Lahti venue were also really fun. Skiing in the Lahti stadium was an unbelievable experience, I had watched so many World Cups on those same trails and actually being able to ski on them was so cool, and also really, really hard.

After a week of training it was time to race. Each of the junior girls had two starts throughout the week, and some of us also raced the relay. The first competition of the week was the classic sprint. I didn’t race this one, but I had lots of fun cheering from my condo as I watched my teammates on TV. There were also U23 races after every junior race, so we had a rest day between each race day to recover and cheer on the U23s. The next race was the 5k skate. This was my first race of the week and I was really excited but also maybe a bit too nervous. It was about 2 degrees F and I definitely had a hard time staying warm out there. Apart from it not being the best race for me, it was a good day for the US as a team and I was happy with my effort and knew that it was a good learning experience.

The week as a whole was a great learning experience. I was super nervous before each race, but it was also easy to relax at times and just soak everything in, hang out with teammates, and enjoy being at World Juniors! Another thing that made the trip so great was sharing the experience with so many amazing teammates. Everyone was so supportive and I definitely think that having such a great team atmosphere played a big role in some of the successes of the week.

My last individual race was the 15k classic mass start. One of my main goals was to stay calm and relaxed in the beginning of the race, get up to the front end, and then hold on as long as I could and just really go for it. I had a lot of fun in this race and it ended up being a really good one for me (ed. note: Novie finished tenth, skiing up from a 71st seed!) The team had some pretty awesome results this day, four top tens for the juniors, so that also made it a super fun day.

The last race of the week was the relay. I was on a team with three other super strong junior girls and we kind of all knew that we might have a chance at a podium. I was selected to race the last leg, so I was able watch my teammates absolutely crush it out there before my turn came along. This was probably the race that I was most nervous for. I really wanted to do well for my teammates. Sydney, who skied the third leg, tagged off to me in third place, right ahead of two other girls who caught me right away. I wasn’t feeling as well as I had hoped, but was able to dig deep and stay with the Swedish girl as she moved into the lead of our little group. When we reached the last hill, I knew that I had to make an attempt at putting in a burst and dropping the Swedish girl. I skied into the hill hard, gaped her by a bit, but then lost momentum at the top where she eventually caught and passed me. We ended up finishing fourth and at first I was definitely a bit bummed that I couldn’t have held onto that third place, but I knew that I gave it my best and was also super proud of our team for the good result and effort we had all put in. 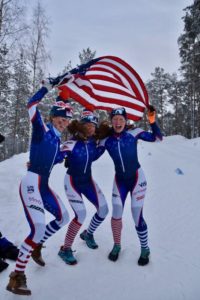 Novie and teammates celebrate their fourth place finish in the relay

Right after our race we ran to the wax room, grabbed the huge American flag and headed to the last hill of the course to cheer on the junior boys in their relay. Watching the boys and being there to cheer them on was definitely a highlight of the trip. Our whole team was out on the course cheering, seeing them win was insane and also a huge deal for US skiing. The day of relays was a pretty awesome way to end the trip and left me inspired and looking forward to more racing this season and hopefully more World Juniors trips to come! 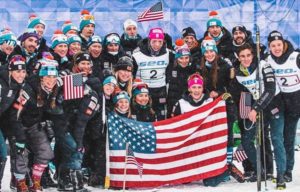